A Report from the UN Conference on the Social and Political Dimensions of the Global Crisis: Implications for Developing Countries (12-13 November 2009)

A conference in Geneva struck a pessimistic note on the current global financial crisis and any hope for a new social and economic order. The conference asked “whether current policy reforms are conducive to a transformative social change or if they only reproduce the status quo.”

A March 2009 IMF report on the downturn’s affect on the Global South and developing countries found that “fluctuating commodity prices, high fuel costs, the rise in food prices in addition to a decrease in remittances, foreign direct investment and aid flow could mean an increase in the financing needs of low-income countries by at least US $25 billion.”

The presenters at the conference painted a picture of a robust neo-liberal economic order that is already in the process of dusting itself off from the crisis and restoring its dominance.

Bob Jessop, from the University of Lancaster, captured the paralysis of opposition to the neo-liberal order by saying “They are busy doing it and we are busy talking about it.”

To paraphrase philosopher Friedrich Nietzsche, that which does not kill us makes us stronger. Neo-liberalism may in fact be strengthened by the crisis, according to presenters. It will evolve and take on new forms, they argued.

The world’s business elites have an enormous capacity to re-shape the rules of the economic game back in their favour. While the massive state support to the banking sector had led some to believe governments were restoring faith in public investments, in fact state support is seen as “timely, targeted and temporary.”

When asked about the future as the crisis passes and countries come out of recession, the presenters believed this was a short-term recovery, and that far worse economic crises would be coming in the next five to 10 years.

Andrew Martin Fischer, from the Institute for Social Studies at Erasmus University, believes the harmful effects of the bailouts will be pushed to the periphery over the next five to 10 years, harming the poor. He also believes a major financial crisis is brewing in China. He called ‘China the fault line in the future.’

The powerful, he pointed out, displaced the costs of their mistakes onto other people. Proponents of different approaches had missed the moment because they were not able to present off-the-shelf strategies that could be deployed in a crisis on short notice. Thus, they had left the field open to neo-liberal solutions.

The global crisis in the short-term has not been worse because of unprecedented global cooperation. Keynsian measures have been used to solve the crisis, but are also used to preserve Wall Street. Also, the enormous contribution of growth in China and India means there are other sources of wealth in the world than just the North.

Getting back to normal should not be what we are doing, the panellists concluded at the conference’s final session. Governments should look at new opportunities for social policy. The panellists were disturbed that the International Monetary Fund (IMF) is seen as part of the solution. This means deep cuts in public expenditure are coming. There will not be a trickle down of wealth and the imbalances from before the crisis will remain. In short, the system was not working before the crisis.

Some policy suggestions put forward included: rural income guarantees, managed migration to support development goals, making a gender perspective critical to development. Governments should take a preventive approach to tackle future crises. Unfortunately, it now seems no money is left to address these problems. Yet business as usual is not an option with so many inequalities and imbalances.

“This conference on the social and political consequences of crisis is a critical subject for debate at this juncture,” said UNRISD’s director, Dr. Sarah Cook. “We are now at a point where many countries, particularly in the North, are emerging out of the severe shock of immediate crisis. Discussions of alternative policies and institutional arrangements at national and global levels may become less urgent; the status quo is reasserting itself and the space for ideas and policies that offer the possibilities of more stable, sustainable and equitable development will quickly shrink.”

Business Insider has reproduced a fascinating presentation about the crisis put together by the French bank, Societe Generale (SocGen). The presentation can be found here: http://www.businessinsider.com/socgen-prepare-yourself-for-the-worst-case-scenario-2009-11#first-it-starts-with-sky-high-public-debt-1

From 1997 to 1999, I worked as the head of communications for the United Nations mission in Mongolia. The country was already experiencing a severe economic crisis as a result of its transition to free markets and democracy from the Soviet economic system. The scale of the economic collapse following the fall of communism was described at the time as the worst peacetime, post-WWII economic collapse. On top of this challenge, the Asian economic crisis erupted. 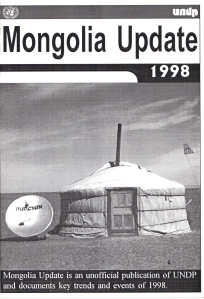 You can read the Mongolia Update 1998 book I wrote here: http://www.scribd.com/doc/20864541/Mongolia-Update-1998-Book. It shows how chaotic events are in the middle of a major crisis. Some of the key lessons we learned during this time include: 1) transparency: trust was critical and all our work was done under the full glare of public and media scrutiny, 2) action: with our existing budgets we made sure to keep doing and spending to hire people, 3) strategy: to encourage the growth of businesses and innovation, in particular the take-up of new information technologies.

This site uses Akismet to reduce spam. Learn how your comment data is processed.